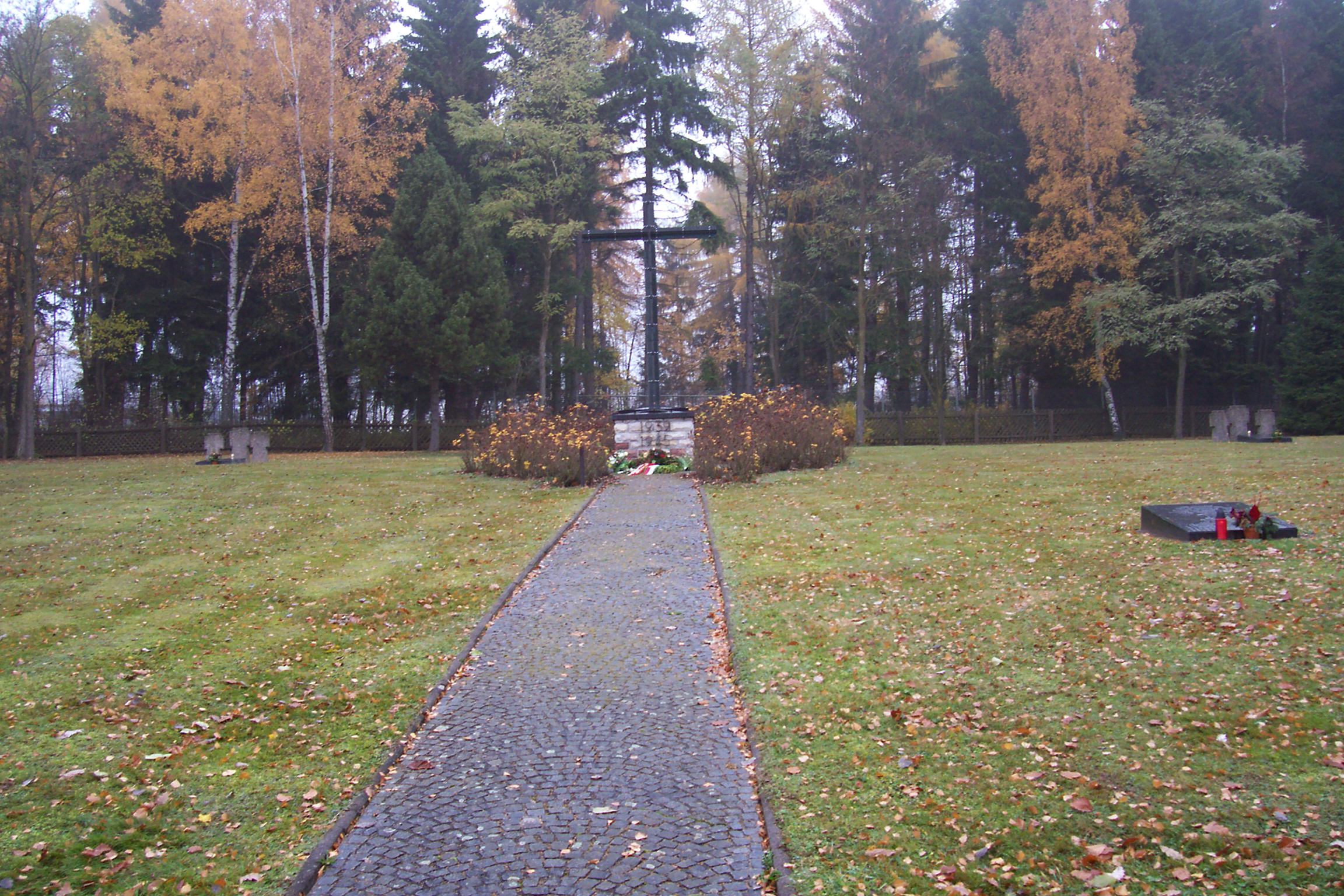 Cross at the cemetery

The Polish war cemetery in Wildflecken is adjacent to the barracks of the military training ground, which was opened in April 1938. As soon as in autumn 1939, the wooden facilities of construction workers were designated as rooms for Polish prisoners of war, and later for successive interned persons of various nationalities, working in labour units in the premises of the barracks and the training ground.

At the end of March 1945, the last Wehrmacht units left the training ground, leaving injured German soldiers and several hundred prisoners of war in the field hospital. On April 7, the 3rd U.S. Army troops also arrived in there. The American military administration organised a camp for Displaced Persons (liberated prisoners of war, former concentration camp prisoners and forced labourers) in the barracks. In October 1945, the camp was taken over by the United Nations Relief and Rehabilitation Administration (UNRRA) and then, in 1947, by the International Refugee Organization (IRO), the UN department responsible for the care of foreigners left behind in Germany as a result of the war and for organising their returns or emigration. In the first post-war months, citizens of the Western coalition states returned to their home countries. When the Russians and Ukrainians were placed in other camps, homogenous in nationality, about 20,000 Poles remained in Wildflecken. They came mainly from the eastern part of the country, so they were deprived of their homeland twice: first because of Nazi and Russian aggression, then as a result of political arrangements of the Yalta Conference.

At the cemetery, 544 people of Polish nationality, men and women, 116 adults and 428 new-born children rest in individual graves. The first name on the list of buried people, originally written by hand, is:

For decades, the subject of war victims resting behind the Iron Curtain was uncomfortable and treated marginally by the Polish communist authorities. The exact location of Stanisław Olszewski's burial place was given to his family in autumn 2008. In November that year, the corporal’s daughter visited the cemetery with her husband and children. More than 63 years after the tragic death, the daughter's longing to pray over her father's grave came true.

In the 1970s, Volksbund Deutsche Kriegsgräberfürsorge e.V. cleaned up and reconstructed the deteriorating cemetery. Individual graves were levelled and covered with lawn, and the names of 119 adults were written on the pedestal of the cross and several metal plaques. Next to the paved path leading to the cross, on the lawn, there is a metal information board with German and Polish inscriptions:

[TO THE MEMORY OF 428 POLISH CHILDREN RESTING HERE, WHO HAD TO END THEIR BARELY BEGUN LIFE AS AN AFTERMATH OF THE WAR.]

A cemetery chapel was also erected, the interior of which is decorated with a mural designed and made by Prof. Wejman from the Jagiellonian University and his son. The main motif of the work is the angel of peace who guides the souls of the dead children through a wall and barbed wire to a better life at the side of God the Father.

The inscription from the information board in German and Polish:

[AFTER THE FALL OF THE THIRD REICH, UP TO 20,000 POLES HAD TO LIVE IN A CRAMPED SPACE IN THE IRO CAMP AT THE WILDFLECKEN TRAINING GROUND. MANY CHILDREN WERE BORN HERE. 428 OF THEM DIED AT THE BEGINNING OF THEIR LIVES, AND 116 ADULTS DIED WITH THEM. RESPECT FOR HUMAN LIFE HAS CREATED THIS RESTING PLACE FOR THEM.]

The whole work of changing the original appearance of the cemetery was completed by the so-called Way of the Cross of the Nations, consisting of ten stations made up of stone plaques commemorating the victims of both world wars, placed by the road leading to the necropolis.

In the nearby barracks of the Bundeswehr (Rhön-Kaserne) there is a small museum dedicated to the history of the garrison, the military training ground, the former DPs' camp and the Polish cemetery.