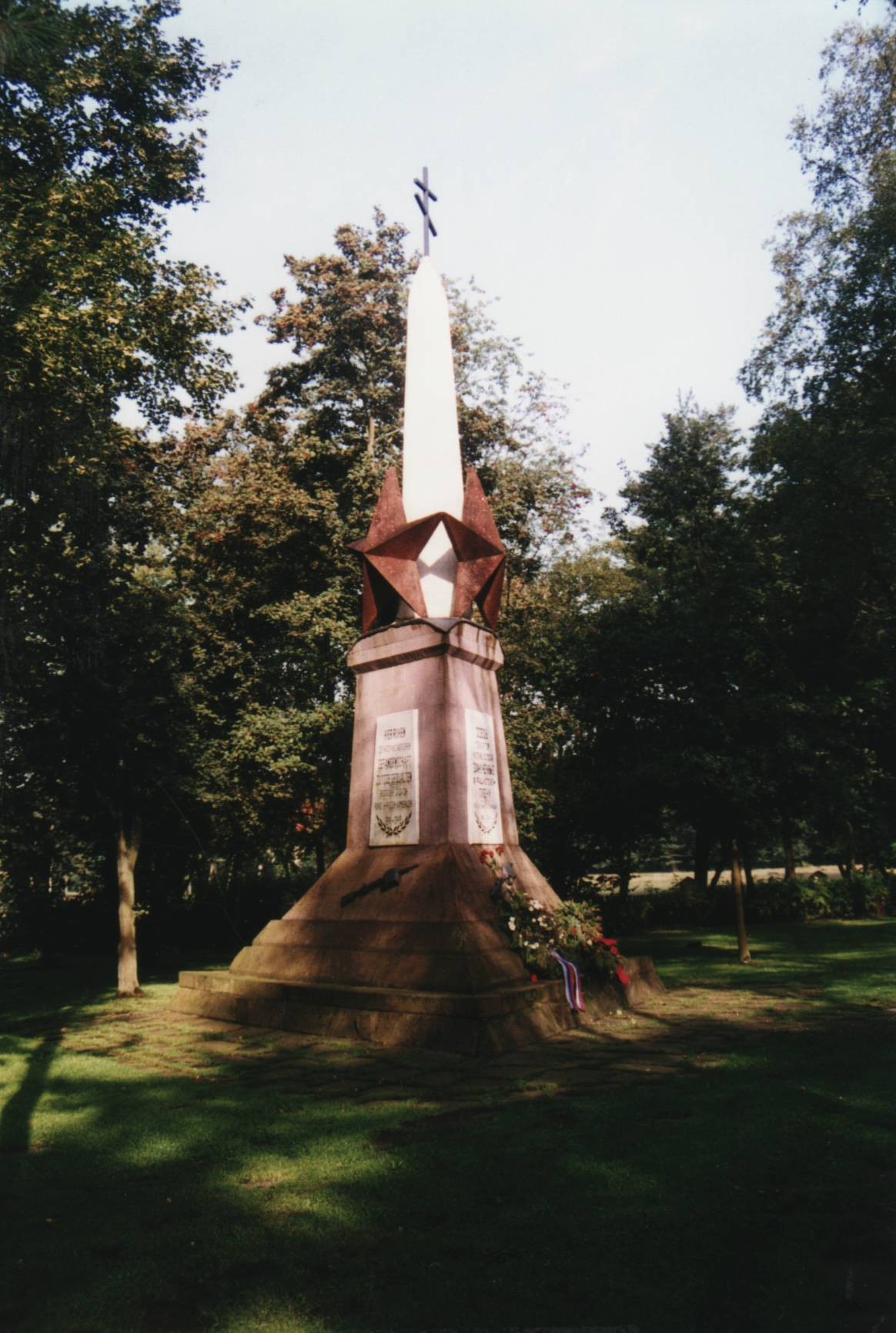 Memorial for the soviet war victims

In Schloß Holte-Stukenbrock there is a war cemetery of the former prisoner-of-war camp - Stalag 326 VI K. Both the cemetery and the camp are among the largest of their kind. The exact number of war victims buried in 36 mass graves and several hundred individual graves is unknown, but it is estimated that there are 65,000 Russian prisoners of war and an unknown number of Polish, French, Serbian and Italian prisoners of war resting there.

A few weeks before Nazi Germany's invasion of the Soviet Union, Stalag 326 VI K, established in April 1941, was prepared to receive a large number of Russian prisoners of war. When the first transport arrived on the 10th of July 1941, the camp grounds were an empty space of 1,000 x 400 m in size, fenced with barbed wire. The condition of the camp did not comply with the assumptions of the Geneva Convention of 1929. From the very beginning, there was a high mortality rate in the camp, because there was a lack of hygiene products, medicines, or any buildings. Prisoners built their own shelters using materials available in the fenced area or made dugouts. Political officers, intellectuals and Jews, who were deported to KZ Buchenwald and murdered there, were ultimately chosen, and from October 1941, labour commands were created. Prisoners were given numbers and sent to work according to military, camp or metallurgical needs. Around 5,000 prisoners died in the last three months of 1942 as a result of terrible conditions, illnesses and hard work.

At the southwestern end of Stalag, a camp for prisoners of war from western countries was carved out, measuring 220 x 200 m. There were also Poles in it. According to the Wehrmacht and Red Cross documents of 1st July 1944, there were 61 Poles in this part of the camp. On the 1st of November 1944, there were 1,657 of them and on the 2nd of April 1945 (the date of liberation) their number was 250. It is not known whether Polish prisoners of war were buried at the cemetery near the camp or in the surrounding necropolises. Probably most of them were buried in mass graves, where - due to the high mortality rate - dead prisoners were buried. Individual graves in this area date back to the early period of the camp's operation. This burial place received the rank of a camp cemetery at the beginning of September 1941. There were also 788 graves transferred from East Westphalia and Lippe county as well as 1,230 transferred from Detmold county between 1960 and 1964 as a result of reconstruction, which gave the cemetery its present shape.

Three days after the liberation of the camp by the American army, the surviving Russian prisoners of war began to work on a monument commemorating the 65,000 Soviet victims. A three-sided obelisk with three red stars and a red ceramic flag on top was completed on the 30th of April 1945 with the help of local German people. The flag was replaced by an Orthodox cross in the 1950s. The three plaques bear inscriptions in Russian, English and German:

Together with the obelisk, several small commemorative stones were placed there, bearing the red star and inscriptions in several languages (but not in Polish). The following are some examples:

Terror and hunger have intensified the bitter hatred for fascism in your hearts.

You were tormented by hunger, cold and beating, you were buried, but you did not become slaves.

So many proud hearts rest here.

The homeland will never forget its sons.

After the liberation, until the beginning of 1948, the grounds of the former camp were used as a place of internment for Nazi party officials, and from 1947 it was a transit camp for former prisoners of war waiting to return home.

In 1967, the Blumen für Stukenbrock (Flower for Stukenbrock) organisation was set up to study the history of the camp and to organise annual memorial ceremonies on the 1st of September. The celebrations include, among other things, laying wreaths in front of a roofed wall with an Orthodox cross and two stone plaques with texts in Russian and German:

HERE LIE RUSSIAN VICTIMS OF THE WAR WHO DIED FAR FROM THEIR HOMELAND IN YEARS 1941-1945. REMEMBER THEIR TORMENT AND DEATH. THE LIVING, TAKE CARE OF THE PEACE BETWEEN PEOPLE. PEACE BETWEEN NATIONS. [translated from Polish]