The so-called Poland songs were written after the Polish uprising in Germany in November 1830. The authors were not so much concerned with casting an eye on Poland. Their main target was the political situation in Germany. The Poland songs were also intended to persuade Germans to struggle against their repression by the Princes and create a liberal system of government. In the 1830s they made a considerable contribution to the German pre-March period.

Some of these songs have been recreated and staged within the framework of a musical history project entitled “History in Songs”. This throws a light on a close link between Germans and Poles that often surprises contemporary audiences. In a Europe that is threatening to break apart once again, such a project could point towards the future.

In the 19th and 20th centuries the Germans’ image of Poland was subject to a huge amount of ups and downs, but no change was as decisive as the rupture during the German Revolution in March 1848. The conclusion of the debate about Poland in the Frankfurt Paul’s Church Parliament laid the ground for anti-Polish attitudes that were in sharp contrast to the enthusiasm for Poland during the 1830s.

Hundreds of German Poland songs came into existence, the majority of which were written and performed in the 1830s. They mostly aimed at propagating ideas for a national and liberal battle for freedom after the Polish uprising in November 1830. This battle also included Germany. Sparked off by the July Revolution in France a wave of revolutions swept through Europe. The order restored by the Congress of Vienna was fundamentally questioned and national and liberal movements dreamt of emancipating themselves from the dictatorship of the Princes. This was also the case in Germany. However because there was no initial revolution in Germany, many Germans took Poland as their role model and German Poland songs were written with the aim of taking the spark of revolution into their own country. The Hambach Festivities and the German pre-March period would have been inconceivable without this enthusiasm for Poland and the Poland songs.

Under the title "Noch ist Polen nicht verloren" (Poland is not yet lost) the music history project “History in Songs” has taken up the tradition of Poland songs once more. The project is all about approaching history through music. German history from the 18th to the 20th century is presented in songs, some of which have been newly put to music. The idea arose during a history lesson in grammar school in the town of Alzey in Rheinhessen and has since been developed further 2007. In order to solve the problem that several historic songs were not available on recordings the teachers decided to sing them themselves accompanied by their own instruments. This made their history lessons much more interesting as witness the enthusiastic response of their students. A musical duo arose from these modest beginnings and nowadays anyone interested in history can book a musical trip with a mix of songs and commentaries.

The “History in Songs” project shows the thematic spectrum of the Poland songs with 12 examples. Around half the songs are played with their original historic melodies. Since the melodies for the other half had been lost new tunes were carefully composed to fit the texts.

You can find the texts and recordings at:

The early democratic movement took up the Polish battle for freedom as early as the 1790s. The start of a song called "Poland May" celebrates the liberal Polish constitution made in May 1791. Later verses then lament the destruction of this freedom by the Third Polish Partition. "My Bold Lagienka" (1825) is dedicated to the Kościuszko uprising. Here liberal values are shown through a friendly dialogue between General Kościuszko and a simple soldier by the name of Lagienka.

Polish emigration as a consequence of the failure of the independence movement is addressed early on in the song "Do not call on anyone to hear my fate" (1825). Here the song clearly warns Germans that the consequence of hesitation and failure can mean the loss of their fatherland.

Possibly the most fundamental political vision of the Poland songs is expressed in the song "Noch ist Polen nicht verloren" (1831), an adaptation of the Polish national anthem “Mazurek Dąbrowskiego“.

“German swords, German might, powerful pillars to support the Poles.

Poland will then be free from tyranny!”

Peoples of different nations should join together in a common battle for freedom against the Princes. A similar thought was formulated by Siebenpfeiffer at the Hambach Festivities: "Long live free, united Germany! Long live Poland, the ally of Germany! Long live the Franks, the German brothers who respect our nationality and independence! Long live any people that breaks its chains and swears a bond of freedom with us! Long live Fatherland, sovereignty for the people and solidarity between the nations!" [after: Johann Georg August Wirth: Das Nationalfest der Deutschen zu Hambach. Neustadt a.H. 1832 (Nachdruck Neustadt 1981), p. 41., online at http://www.demokratiegeschichte.eu/fileadmin/user_upload/Material/Rede_Siebenpfeiffer.pdf]

Alongside direct demands to fight, the main phase of Poland songs mostly comprised two other themes. First, the twin pain of repression and flight was a constantly recurring motif and both aspects were only too clear as a recurring expression of the relationship between Germans and Poles. Second, hope: hope that the struggle would end successfully in liberation.

In "Mickiewicz – on the distant banks of the Vistula" (1833) Ludwig Uhland expressed the belief that the tide could still be turned even when the Polish cause seemed to be lost:

"A chord strikes up amid the solemn silence.

Such spirit conjures life, the dead will be reborn.

Yes, the master’s song ensures: Poland is not yet lost."

When freedom in Poland is not yet lost the same also applies to freedom in Germany. German freedom and Polish freedom – and also French freedom. In the view of the German Poland songs all three are indivisible. The German Polish songs of the 1830s did not recognise any competition between the different struggles for freedom, nor that the interests of Poland could stand in the way of German interests. 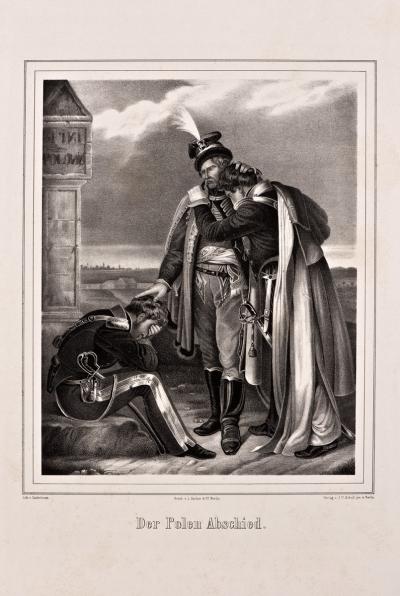