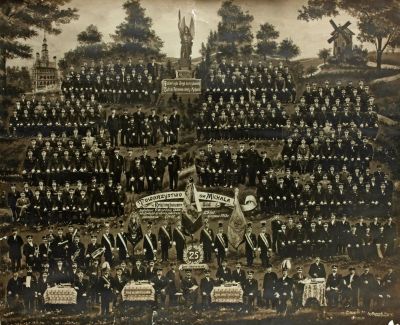 Polish life in Recklinghausen at the end of the 19th and beginning of the 20th century was very lively and multifaceted. It also involved numerous clubs and organisations. One of those was the St. Michael’s Club founded in 1888 and dedicated to the archangel Michael.

On the occasion of the club’s 25th anniversary, a remarkable photomontage was created by a Polish photographer (Ignac?) Maciejak (signature bottom right). On a hillside beneath the centrally dominant statue of the Archangel Michael, 18 groups of members and 9 flag bearers are pictured in total. As the people are all male and dressed in festive garb (some uniformed), and there are no Catholic priests present, it can be assumed that the club was independent of the Catholic church. At the time, this was not a common state of affairs.

Under the statue of the Archangel Michael can be found an inscription with the wording (in Polish) setting out the club’s main aspiration:

Saint Michael, be my patron saint

As a sign of their connection to the new homeland, Recklinghausen town hall is shown in the top left of the picture. A windmill can be seen in the top right-hand corner as a symbol for work and prosperity.

In the middle of the composition, above the flag bearers (three of whom carry sabres), is an inscription in Polish:

On the middle flag of the three, the image of Saint Mary with Jesus can be seen, adorned with a number of ribbons. On one of them is the inscription (Polish): Srebrny jubileusz Tow. św. Michała w Recklinghausen Süd (Silver Jubilee of the Saint Michael Club in Recklinghausen Süd). The flag on the left bearing the inscription "25. letni jubileusz” (25th anniversary) was most likely created specifically for these festivities. The flag on the right is from the time of the club’s foundation in 1888 (inscription in Polish; “Towarzystwo św. Michała w - illegible word - założone w dn. 9. września 1888 r.” (The St Michael Club in - illegible word - founded on 9 September 1888).

Some of the members shown are carrying musical instruments (bottom left), which indicate that the club had a brass band with a conductor.

At the bottom of the photo are four tables symbolising the club’s activities. On the tables are a number of items, including a model of a chapel (?) and writing utensils with a pile of documents. At the right-hand table, a member is posing as he writes, most probably in a chronicle of the club. The table ensemble as a whole gives the impression of the respectability and solidity of the whole club. It acts as the basis and foundation for their activities, uniting all the members and focusing overall on realising the club’s main objective: The veneration of the Archangel Michael, who, in Christianity (as well as in Judaism and in Islam), is traditionally considered the assistant and supporter at the Last Judgement. Inscriptions in Polish are affixed to two tables:

Unity should connect us

Peace and love let us flourish

They bear testimony to the stated aspiration of the club’s members for harmonious union, mutual understanding and love. This harmonious union is also the central feature of the image composition, giving the impression that this Polish club in Recklinghausen, Germany at the turn of the 20th century was a structured, peaceful and self-confident organisation.

There is currently no archive material and no other source or literature references about the association itself. 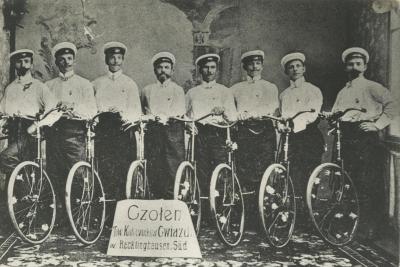 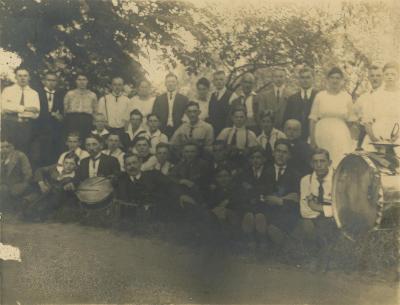