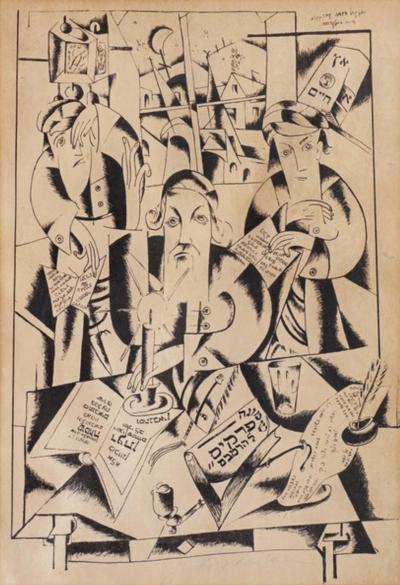 From 31st March to 5th May 2019, as part of the theme year on Else Lasker-Schüler and "The Storm", the Zentrum für verfolgte Künste in the Solingen Art Museum presented an exhibition of around seventy paintings and drawings by the Polish-Jewish painter, Jesekiel David Kirszenbaum (also: Jesekiel Dawid, Jechezkiel David, Kirschenbaum, 1900-1954). The exhibition was also part of the Rhine-Ruhr Jewish Cultural Days. Kirszenbaum was born in Staszów in the Congress Poland ruled by the Russians. He moved to Duisburg in 1920 to work as a miner in the Ruhr area, used the wages he had earned to study at the Staatliches Bauhaus in Weimar in 1923/24, and then moved to Berlin. Here he became an active member of the Berlin art scene and worked as a caricaturist and illustrator for the Berlin magazines Ulk, Der Querschnitt and Die Rote Fahne, as well as the Munich-based Jugend. Herwarth Walden (1878-1941), director of the Berlin gallery Der Sturm, wanted him to follow up the pre-war success of the gallery with Marc Chagall and exhibited his works in 1927. But the hoped-for major breakthrough failed to materialise. In 1929 he became a member of the Association of Revolutionary Visual Artists in Germany ("Asso") and exhibited regularly with this group. In 1933 he and his wife Helma, née Joachim, fled from the National Socialists to France. Six hundred works were destroyed in his Paris studio and his wife was murdered in Auschwitz. He died in Paris in 1954. The exhibition in Solingen was the artist's first solo exhibition in Germany since the 1930s. Works by Kirszenbaum can be found in the possession of the family, in private collections and in the Bauhaus Archive in Berlin, in the collection of the Jewish Historical Institute/Żydowski Instytut Historyczny im. Emanuela Ringelbluma in Warsaw, in the Frans-Hals-Museum in Haarlem, in the Musée du Petit Palais in Geneva, in Israel in the Tel Aviv Museum of Art, in the Israel-Museum in Jerusalem and in the Mishkan Museum of Art in Ein Harod, in Paris in the Centre Pompidou and in the Fonds national d'art contemporain.

The period after the Second World War, summarised in the exhibition under the heading "Art after the Shoa" (ill. 16), amounted to a mere nine years in Kirszenbaum's life. However, this was when most of Kirszenbaum's works inevitably originated. In contrast to the preceding periods, these works in the exhibition were examples of larger groups of works that still exist in museums and private collections. As can be found in his writings, Kirszenbaum's personal situation was desperate. With neither money nor family, devastated by the loss of his wife and his life's work, he had to turn to the French state to survive. He found friends like Alix de Rothschild who helped him out of his financial and psychological distress, motivated him to resume his artistic work and take part in exhibitions.

In his paintings he dealt with the effects of the war. " The Flight of a Mother with two Children" (1945, ill. 16, left) is a variation on the theme of the eternally wandering, homeless, and fleeing Jews, which had occupied his mind in drawings, etchings, and paintings since 1938. On several occasions he painted angels carrying into eternity the "lost souls of the Stetls", for whom "there is no place left on earth" (ill. 17). He painted musicians (ill. 18) who, like the "Sitting Peddler" and the "Jewish Man with Tallit" (both around 1945, ill. 19), recall typical characters from Staszów and the lost world of Stetl. In Paris he could also have seen a "Trumpeter" (1946, ill. 20) and a "Violinist" (1949), both in a gala costume. Both allude to another theme that Kirszenbaum worked on during this period: clowns or, more generally, the circus (not represented in the exhibition), a theme often chosen by painters at the École de Paris, especially Georges Rouault (1871-1958), who is said to have been a friend of Kirszenbaum. The flat, luminous colours of these portraits are reminiscent of the Fauves, perhaps André Derain. More French influence – apparently that of Amedeo Modigliani (1884-1920), who died at an early age – can also be seen in the portrait of the young journalist Robert Giraud (1921-1997, ill. 21), painted in 1946. Kirszenbaum might have made his acquaintance in Limoges, where he had been arrested and threatened with death by the Germans as a member of the Resistance and who lived in Paris after the end of the war.

Kirszenbaum's return to his childhood in Staszów during these years also led to an increased preoccupation with the Old Testament and other religious themes. Amongst others, he created a monumental triptych featuring the prophets Moses, Elijah and Jeremiah in life-size formats (1947), that can be seen today in the Tel Aviv Museum of Art (not in the exhibition). This ambience also includes a group of portraits of Christian saints and Jewish thinkers (1945-47), including his own father, partly in Expressionist style, partly in Fauves flat style, but mostly in darker colours (ill. 22-23). He also began to project religious themes onto the site of his childhood again, but now in striking colours: once again the "Arrival of the Messiah in Stetl", and next to it a "Passing Angel" above the buildings and inhabitants of the city (both from 1946); a watercolour drawing of the "Rapture of the Prophet Elijah" on a winged horse against a similar backdrop (1954); and finally Jews "In front of a Christian Statue in the City" (ca. 1947) and "Praying Women" kneeling in front of a Marian column (1949) (ill. 24). Then again, in the fine grey tones of the early Parisian period with smaller colourings, there is an "Assembly under the Tree", presumably also a reminder of Staszów, and an unlocalised "Landscape". Both of these were created around 1947. In the exhibition they were linked for their stylistic congruence with a "Still Life with Flowers" and a "Landscape with a House" dating back to the time of his first imprisonment in Meslay du Maine in 1940 (ill. 25).

Kirszenbaum broadened his style considerably at the end of the 1940s, when some of his works with watercolours crossed the border to abstraction. Kirszenbaum now assembled free, somewhat organic forms, like those invented by Piet Mondrian and Wassily Kandinsky as early as 1910, with abstract textures and arabesques. During this time, Roger Bissière (1886-1964), a member of the École de Paris, turned to tableaux mixing representational and abstract forms, and this is also the case in Kirszenbaum's "Abstract Garden" (1949) and his "Fish with Abstract Background" (ca. 1948, ill. 26, 27). Here the influence of Paul Klee can be clearly seen. Kirszenbaum cultivated a friendly and collegial relationship with Klee during his studies at the Bauhaus, and wrote about the significance of this relationship for his work in his memoirs. In his early years Bissière was also inspired by Klee. 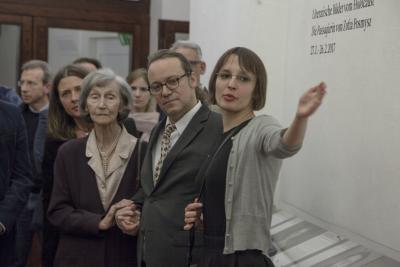 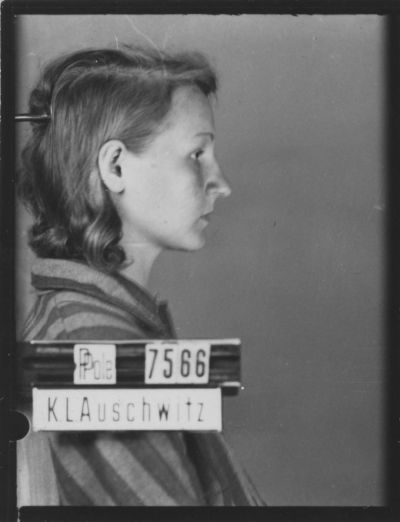 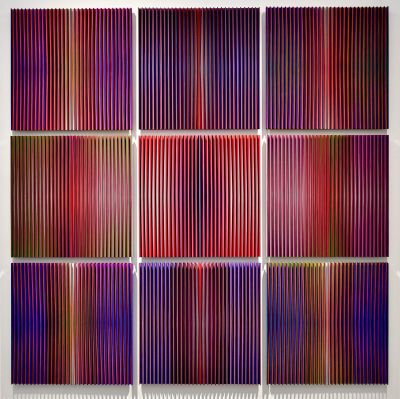